The idea „Follow the Vehicle“ is based on a simple principle: two cars, one driver. The superior car driven by a person determines all relevant parameters as its fast, direction, line, drive way or an aim of the drive. Mucha data regarding of wheel movements, acceleration and braking the subordinated vehicle gains by wireless transmission  from the supeprior car. The second car follows the first one until 10 meter distance.

Before the initiation of the drive both of cars identify through a digital code. Testing cars, two cars ŠKODA SUPERB iV, are equipped by hardware and software interfacing as well as high modern technologies based on smart cities technology and intelligent traffic systems. The testing cars follow traffic infrastructure and communicate through Car-to-X. The exchange of data happens by means of the standart for automotive communication ETSI ITS-G5 and mobile networks 4G/LTE and 5G.

To image discerning and identification of three-dimensional objects in surroundings ŠKODA SUPERB iV cars use sensors that are subsequently equipped by a camera system, special sensors, radar systems and communication unit. The testing cars „Follow the Vehicle“ simply reads a set of various data for example current position of the car and parameters related with driving. The systems monitor the surrounding of the car and current traffic in a real time. 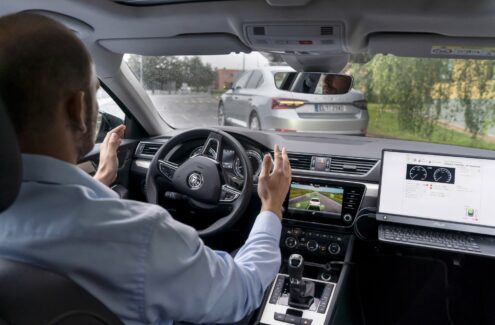 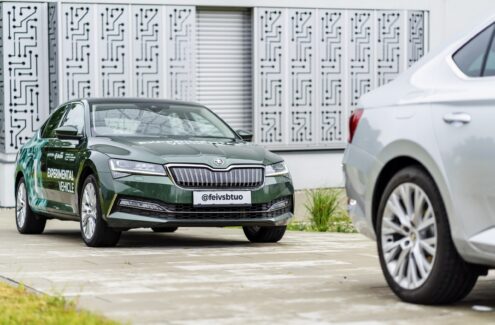 I want to study at FEI, I want to submit application.

“I studied at FEI”

My advice is to go into it with enthusiasm and taste to learn and get to know new things. This is necessary for personal growth and start of study.

Cookies - manage consent
In order to provide you with the best possible service, we use technologies such as cookies to store and/or access information about your device. Consenting to these technologies allows us to process data such as browsing behavior or unique IDs on this site. Not consenting or withdrawing consent may adversely affect certain features and functionality.
Manage options Manage services Manage vendors Read more about these purposes
Preferences
{title} {title} {title}